Cannabis Culture marijuana dispensary in Toronto was raided today (June 23rd, 2016), a month after the initial “crackdown” began. Canna Clinic in the Kensington Market was another victim of the latest raid. 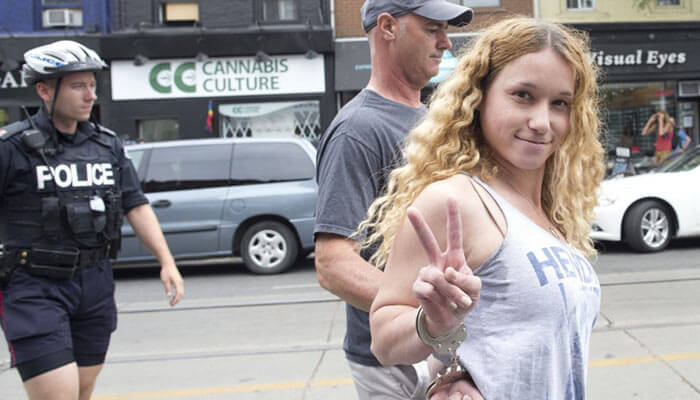 “As far as I know, no patients and no customers were arrested.” Cannabis Culture owner Jodie Emery told Leafly.

The Cannabis Culture dispensary on Queen Street in Toronto was opened very recently, and the owners aren’t surprised in the least that it was raided. Jodie and Mark Emery decided to open the dispensary and serve anyone 19 years of age or older. It was a sort of protest against the Liberal government’s reluctance to pursue legalization efforts “immediately” which Justin Trudeau promised during his campaign. Even refusing to decriminalize marijuana while exploring legalization, a big middle finger to all cannabis proponents who were fooled into thinking the Liberal government had their best interests in mind.

The news broke over Twitter when the Cannabis Culture account announced the raid was in progress at 1:20 p.m. Toronto time. A few bystanders snapped some photo’s and tweeted about the raid as well, including VICE Canada’s Ebony-Renee who tweeted “Police tell bystanders they’ll seize their phones if they take pictures.”

Police were seen escorting 3 employees from the Cannabis Culture dispensary, in cuffs. The windows were covered, doors were locked and customers were turned away.

One of these customers was Mike Smith, “I can’t find a doctor to prescribe me legal weed, so this means I’m stuck between a rock and a hard place.” Mr. Smith has been prescribed OxyContin from a medical professional, but would much prefer to treat his pain with medical marijuana.

Imagine A Politician With The Balls To Keep Their Word…

The fact that a doctor is willing to prescribe OxyContin and won’t even discuss the possibility of a medical marijuana prescription is evidence of a deep-rooted problem in Canada and the United States. These opioid painkillers are prescribed at an alarming rate, carry a laundry list of harmful side effects and pose a serious risk of abuse and addiction. Marijuana possesses none of these dangers, and in many cases it’s a more effective treatment option, yet most doctors won’t even entertain the idea of medical marijuana.

When the Liberal government was elected, there was a palpable sense of optimism surrounding marijuana legislation in Canada. Today, minor marijuana offences are still being pursued to the full extent of the law, despite the promise of legalization. Outlining a clear disconnect between the desires of the voting public, political officials and law enforcement.