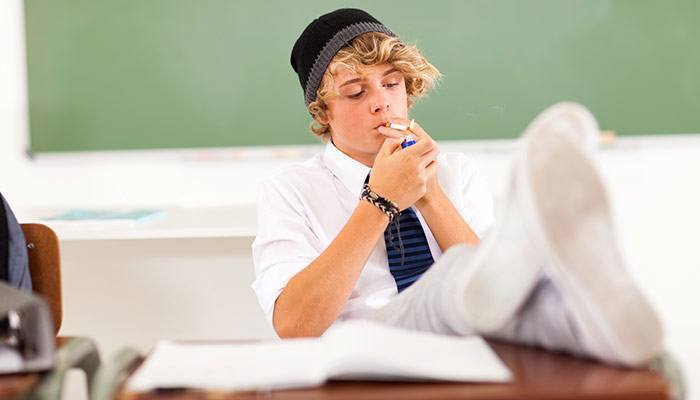 In 1999, 19% of college students surveyed reported smoking cigarettes daily. Now, only 5% identified themselves as heavy cigarette smokers, a huge shift in just 15 years.

Almost 6% of full-time students who responded to the University of Michigan survey reported using marijuana daily or at least 20 times in the past 30 days. This means that there are more habitual pot smokers than cigarette smokers on campus.

What Does It Mean?

Teens and young adults are obviously taking the health warnings to heart when it comes to cigarette smoking. It went from being the ‘cool’ thing to do, to the foolish thing.

Less students are abusing alcohol in the latest survey. Only 5% reported they had engaged in extreme binge drinking in the past 2 weeks (15 or more drinks in a row).

Whether or not the increased popularity of marijuana is responsible for the decrease in binge drinking on campus is unknown. But I for one can say that I certainly don’t feel like downing 15 drinks in a row after smoking a joint. So there could be some correlation…

Popularity of Marijuana on Campus

As the laws surrounding marijuana use relax, so does the stigma attached to it. Evidenced by the fact that 21% of college students surveyed reported using marijuana at least once in the last month, with 34% having used marijuana in the last year.

Now that marijuana is legal in a handful of states, and more research is being published on the benefits of cannabis, the stigma is beginning to disappear. A welcome shift in the public’s perception of marijuana, it can be a useful tool, not a dangerous gateway drug.

No matter how much evidence is published on the safety and benefits of marijuana, there will always be die hard anti-marijuana activists. We just assume they cannot read, as any free thinking literate adult wouldn’t have any reason to support the war on weed.

More From The Chill Bud

Why Prohibiting Cannabis in Sports is Unethical