Effects of Cannabis On Your Ability To Ride A Bicycle

­
Effects of Cannabis On Your Ability To Ride A Bicycle 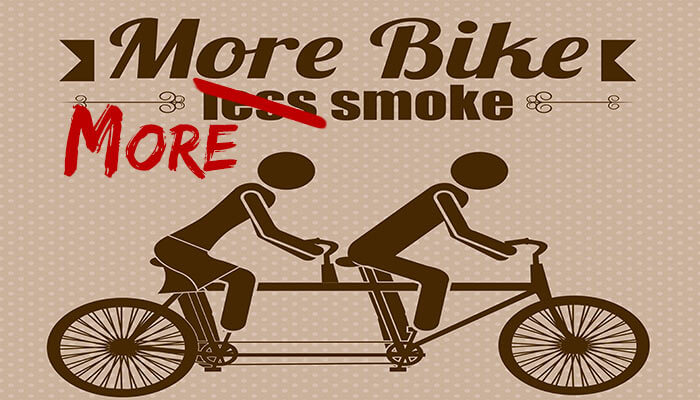 A new study published in the International Journal of Legal Medicine earlier in 2016 is sending shock-waves through the medical cannabis (and recreational) world. Researchers in Germany examined the effects of cannabis on regular cannabis consumers’ ability to ride a bicycle.

Effects of Cannabis On Your Ability To Ride A Bicycle

Lead author Benno Hartung, out of University Hospital Düsseldorf in Germany said “only a few driving faults were observed even under the influence of very high THC concentrations. A defined THC concentration that leads to an inability to ride a bicycle cannot be presented.”

These ‘high THC concentrations’ equate to smoking 3 joints back to back before the cycle. So even under the most extreme circumstances, individuals were able to ride a bicycle through a predefined obstacle course with relative ease.

The researchers did note that “The test subjects showed only slight distinctive features that can be documented using a medical test routinely run for persons under suspicion of driving under the influence of alcohol or drugs.” Meaning that a properly trained individual would be able to tell these individuals were high (after 3 back to back joints it’s no wonder!), but not based on their driving performance.

This study goes a long way to help clear up any misconceptions around ‘drugged driving’. There have been multiple studies done on the driving performance of individuals under the influence of marijuana, but they sway both for and against.

Looking at the crash statistics of states that have legalized marijuana can give you a good idea of how cannabis could influence driving habits. The number of people driving under the influence of alcohol dropped, the number of deadly collisions dropped and tax revenue soared! Seems pretty cut and dry to me.

The study of cannabis’ effect on consumers ability to ride a bicycle only examined 14 individuals (12 male and 2 female), so while the results are quite promising for weed proponents, the sample size is too small to make any real waves. Our hope is that this initial study will spark the need for a more robust one, a nice meaty study to help sway politicians and lawmakers in the right direction.