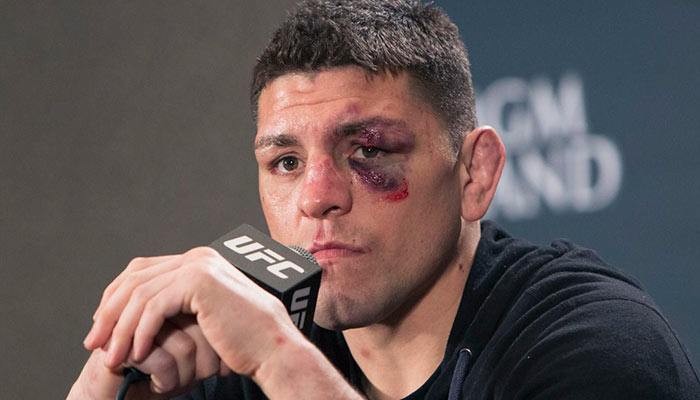 It’s not much of a secret that Nick Diaz regularly smokes pot, he even has a medical marijuana license in California. However, after testing positive for cannabis use for the third time, he has been suspended from the UFC for 5 years.

The NSAC (Nevada State Athletic Commission) prohibits athletes from using sedatives, muscle relaxants, sleep aids, opiates, cannabis, diuretics (to cut weight), stimulants (amphetamines, cocaine etc…), and steroid use. Each offense brings with it an increasingly harsh punishment in the form of suspension from the sport and a rather large fine.

Yes, performance enhancing drugs are a problem in professional sports and have been a problem for decades. Not a lot seems to be done about it in the vast majority of cases though. And who decided that cannabis is a performance ENHANCING drug?

Marijuana has been found to naturally relieve pain, inflammation and muscle tension. It is also infinitely safer than any over the counter pain reliever (aspirin / Tylenol etc…).

Diaz Releases Video Protesting the NSAC’s Decision to Suspend Him

Nick Diaz was understandably upset with the NSAC’s decision to suspend him from fighting for the next 5-years. ESPN’s Brett Okamoto quickly published a video of Diaz speaking out against the unequal punishments handed down by the NSAC. Diaz brings attention to the enormous problem of steroid use in the UFC, “I never did steroids in my life. That’s another thing I’ll tell you right now. I know all the fighters, and they are all on steroids. All you motherf***ers on steroids,” said Diaz.

We recently published an article outlining the dangers of marijuana prohibition in professional sports.

Marijuana is a safe and effective way to manage chronic pain and muscle tension, this isn’t our opinion, this is a fact.

In states where medical marijuana was available, the number of people who used opioids to manage their pain declined. The number of deaths associated with opioid overdoses and abuse also declined.

It’s about time professional sports leagues re-examine their rules and regulations surrounding cannabis use. If a professional athlete like Nick Diaz decides to naturally manage their pain with marijuana, that should be their decision.

Fellow UFC fighter and close friend to Nick Diaz, Ronda Rousey, lays it all on the table in a press conference in Melbourne.

“I’m sorry, but it’s so not right for him to be suspended 5 years for marijuana. I’m against testing for weed at all. It’s not a performance enhancing drug. And it has nothing to do with competition. It’s only tested for political reasons.” Ronda explained, trying to steer the conversation toward the suspension as opposed to her upcoming fight.

When discussing the punishments for performance enhancing drugs, why is it that Anderson Silva got a measly 1-year suspension for using anabolic steroids, but Diaz gets 5 years for pot?

“If one person tests for steroids, that could actually hurt a person, and the other person smokes a plant that makes him happy, and he gets suspended for five years! Whereas a guy who could hurt someone gets a slap on the wrist. It’s not fair! It’s not fair at all. I can’t believe it’s not being said more. And you know what, I think we should free Nick Diaz.” Said Rousey before turning to Dana White and reiterating that this was the NSAC’s decision, not his.

I am sure Ronda will not give up fighting for her friend, and she may just have enough pull to get something done. Seeing as she is the UFC’s biggest draw and highest paid fighter at the moment. Let’s #FREENICKDIAZ.