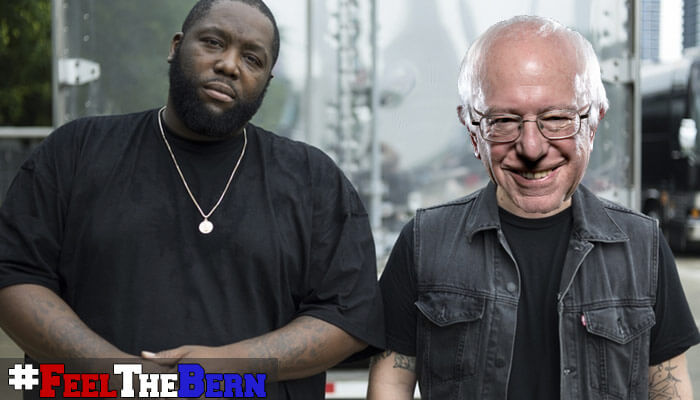 Killer Mike and Bernie Sanders, A Dynamic Duo for Change

Bernie Sanders and Killer Mike are an unlikely pair at first glance but they have teamed up to win over young voters, and it’s working!

Killer Mike recently invited Bernie Sanders to his barbershop in Atlanta, The SWAG Shop, to discuss some serious issues facing Americans. Their conversation touched on subjects like health care, social justice, economic freedom, gun control and marijuana legalization. You can check out the convo on Killer Mike’s YouTube channel in the 6-part video series.

Bernie and Killer Mike both agree that marijuana being a Schedule I drug is “absolute bullshit.” Discussing how unjust marijuana laws have deeply affected colored, poor and working-class communities and how Bernie plans to remedy the issue.

Run the Jewels, Run the Country

Pairing up with Killer Mike was a bold move for Bernie, it could potentially alienate some of his older supporters, but it could be a massive boon to draw more young votes.

Sanders said “Democrats win when people vote,” during Killer Mike’s interview. If enough people make their voice heard, the Democrats believe they will be victorious. The Republican circus certainly makes waves in the media, but the hope is that cooler heads will prevail and people will see through the fear-tactics.

Sanders is not shy when it comes to pointing out problems with the government and the economy. He is calling for an end to the Lying, Cheating and Stealing happening on Wall Street and in the government.

Bernie Sanders is closing in on Hillary Clinton and could become the next Democratic party leader. Appealing to a younger crowd will help Bernie surpass Hillary and Donald Trump, two powerhouse names in the 2016 presidential election.

So far Bernie Sanders is the only presidential candidate to take a clear stance against marijuana prohibition. You have our vote Bernie! #FeelTheBern