“The results were amazing. What we saw when Rumer was given the medical cannabis oil was nothing short of miraculous. Her cancer ridden little body was alive again – Rumer had almost instant quality of life. Her skin color came back, her eyes were sparkling again. We were certain after seeing these results that her recovery was entirely possible.” – Adam Koessler 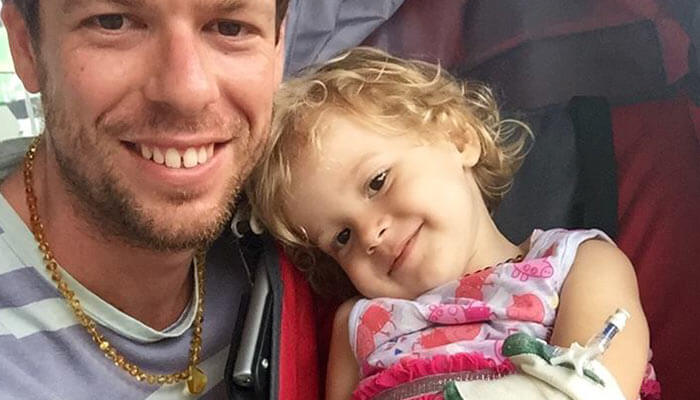 Two year old Rumer Rose was diagnosed with stage 4 neuroblastoma on Christmas Eve. Her father, Adam Koessler did what any parent would do, he tried to help his daughter. Beginning her treatment with the doctor approved chemotherapy treatments, supplementing it with naturopathic medicine, a gluten free diet and medical grade CBD oil.

Rumer’s parents decided to try CBD oil because of the massive success so many others have had with it. Cannabidiol (CBD) is an all natural cannabinoid derived from the cannabis plant, it has no psychoactive properties and no harmful side effects.

After treating his daughter with CBD oil for a short time, Adam noticed a huge difference in her quality of life. His once lifeless daughter now had that spark of life back, there is one problem though, Adam lives in Australia and is now a criminal.

Once the hospital learned what Adam was using to successfully treat his terminally ill daughter they contacted the police. Adam was promptly arrested and charged with possession of a dangerous drug and supplying it to a minor.

As soon as the story hit the airwaves, there was an outpouring of outrage and support. A petition on Change.org was initiated to have Koessler’s charges dropped, garnering over 200,000 in under a years time.

Why Cannabidiol Is So Dangerous

Laws that call cannabidiol a ‘dangerous drug’ are simply ridiculous, baseless and cater to the agenda of a multi-billion dollar medical system that is deeply flawed in many ways. Cannabidiol has no risk of being abused, it does not alter your mind, there are no known harmful side effects and it is a naturally occurring substance found in a plant.

Cannabidiol actually yields a number of seriously promising health benefits, it is an anti-inflammatory, an antioxidant more powerful than Vitamins C or E and it has powerful cancer fighting properties. Perhaps it is because CBD is so effective that it is prohibited by fear-mongering governments who regularly ignore scientific facts.

To Protect and Serve (Their Own Interests)

Adam Koessler was released on bail under the condition; he doesn’t see his daughter.

Please keep in mind, we are not talking about medical marijuana, we are talking about cannabidiol. I am a huge supporter of medical marijuana and believe it should be readily available across the globe, but it is still a mind altering substance. If Adam was handing his 2-year old daughter a joint everyday, I could see where there would be some issue. Instead he was giving his daughter a dose of CBD oil, akin to a liposomal antioxidant supplement.

Try putting yourself in the shoes of Rumer’s parents. Watching their daughter suffer through countless chemotherapy treatments with absolutely no joy or vigor in her life. A two year old girl who is on death’s doorstep with no reprieve in sight. If you found something that could help give your daughter a quality of life back, wouldn’t you make sure she had it, regardless of the legal penalties?

Adam Koessler wasn’t treating his daughter with marijuana, he was treating his daughter with cannabidiol. He was giving her a quality of life back, he was giving her a chance to have some joy in her life. The fact that he had the courage to seek alternative treatment despite the fact it would make him a drug dealer in the eyes of the law is reason enough to both praise this man and condemn the Australian government for their ignorance.