Working our way down the line of Arizer vaporizers, we decided to try out the most affordable portable vape they offer; the Arizer Solo. Based on the price point, we assumed the Solo would be similar to the Air, but we didn’t have the same expectations. What we found was rather surprising, delightful and resulted in far more “testing” than we typically do for a vaporizer review. 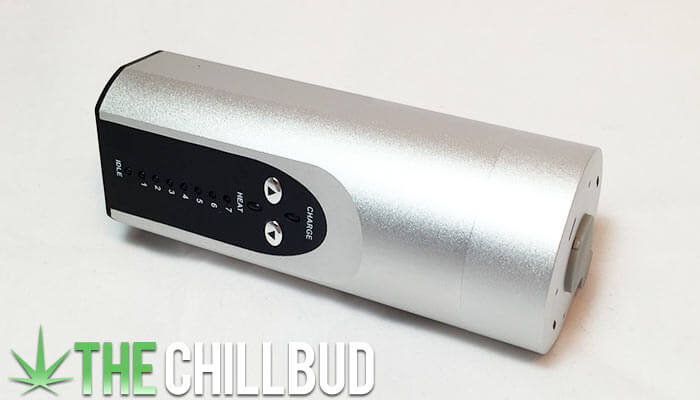 The Arizer Solo is a fantastic value at $199. Any vapor connoisseur would count themselves lucky to have a Solo in their collection. While the Solo doesn’t carry the same prestige as the newer Arizer Air model, depending on your vaporizer needs it may be the better option.

A few things that you should keep in mind before purchasing your first vaporizer are: where do you plan on using it most? Is battery life a major concern? Is stealth an issue for you? What do you plan on vaporizing (herbs / concentrates or both)?

As far as portability and stealth go, the Arizer Air beats out the Solo. The Air is lighter, sleeker and much easier to throw in your pocket. The Solo is a bit clunkier, heavier and it would be difficult to conceal in a pocket. That being said, the battery life is slightly better with the Solo, it costs less and in my personal opinion the vapor quality is better from the Solo.

Despite being an older model, the Solo has a few features that I liked more than the Air. One being the 7 different pre-set temperature settings, the next being a more specific battery level indicator on startup. Again, the battery life of the Solo is slightly better than the Air, but you sacrifice the ability to swap out batteries.

Size is one of the most important factors for most people looking for a vaporizer. People who like to vape on the go generally prefer a smaller, lighter and less conspicuous vaporizer. Personally I do the vast majority of my vaporizing at home, so size and stealth aren’t a concern. The main thing I look for in a vaporizer is ease of use, efficiency and vapor quality. All things that the Arizer Solo has perfected!

The unit itself feels very solid and the glass stems fit very securely in the oven. Another major bonus is the Solo is extremely easy to clean. The oven itself doesn’t seem to get dirty or sticky at all, the only thing you will need to clean is the glass stem, which is a breeze! You can either use some isopropyl alcohol and clean it out with a pipe cleaner & Q-tip, or you can make some edibles with the stem reclaim.

Now let’s get to the meat of the vaporizer, the vapor quality. I can’t say enough about the Solo’s top tier vapor quality and efficiency. The Arizer Air blew me away as far as vapor quality and efficiency, but the Solo took it a step further. The Solo lets users enjoy thick vapor clouds that are surprisingly cool. The oven itself is stainless steel, and the glass stem is the only thing that comes in contact with it, so the taste of the vapor is extremely pure. The efficiency of the Arizer Solo (coupled with vapor quality) is the main reason you should buy this vape. The bowl itself isn’t massive, but it packs far more of a punch than you might expect, especially if you’re used to using some other portable vaporizers that don’t hold a candle to the Solo in terms of efficiency.

Let’s start the pros list off with the most important one of all, the vapor quality of the Arizer Solo is unmatched by any portable vaporizer, and the majority of desktop vaporizers! From vapor density, to the taste and irritation level, the Solo performs extremely well.

The price of the Arizer Solo is a little bit unreal. Considering this vaporizer performs better than many models that cost up to $100 more, this is a fantastic value! Do yourself a favor and make it your first vaporizer purchase, or add one to your vaporizer collection, you won’t be disappointed.

Efficiency is important. One of the reasons many people switch from smoking to vaporizing is because you get far more from your herb by vaporizing it. Efficiency varies widely from vape to vape though. The Arizer Solo is hands down the most efficient portable vaporizer I’ve had the pleasure of using.

The only con that comes to mind would be battery life. Yes it’s better than the Air, but you can’t simply swap out a dead battery for a charged one. However, you can use the Arizer Solo while it is charging, so if you’re at home it isn’t really an issue. I found I could get around 3-4 full sessions out of each charge, each session consisted of two full heat cycles. It’s not a major issue, but I would hesitate to bring the Solo out for a day trip where a charger wasn’t readily available.

Size and weight are the two major detractors, again, for my own personal vaporizer needs this doesn’t make a difference. But I know that many vape enthusiasts like to travel with their vaporizer, take it for a hike or a bike ride, so size and weight play a significant role in their purchasing decision.

To be totally transparent and honest, the Arizer Solo is probably my favorite daily driver as far as portable vaporizers go. It trumps the Air, and blows many $250+ vaporizers out of the water. A huge thank you goes out to Arizer for sending us their whole line of vaporizers. Before trying them all out I would have just assumed the Air was the one to get; and for some people it is, but for the vapor snobs that don’t mind a slightly larger and heavier unit, the Solo is the clear choice.

One of our favorite at-home portable vaporizers.