Since we laid eyes on the JET Waterpipe we were immediately intrigued and needed to get our hands on one. Thankfully, the kind folks over at JET were more than happy to send us one of their JET BLK-sm-X5 water pipes with a few of their JETstack percolators to try out. Not only is this one of the most advanced bongs we’ve ever tried (or seen), it’s virtually indestructible and allows for plenty of customization. 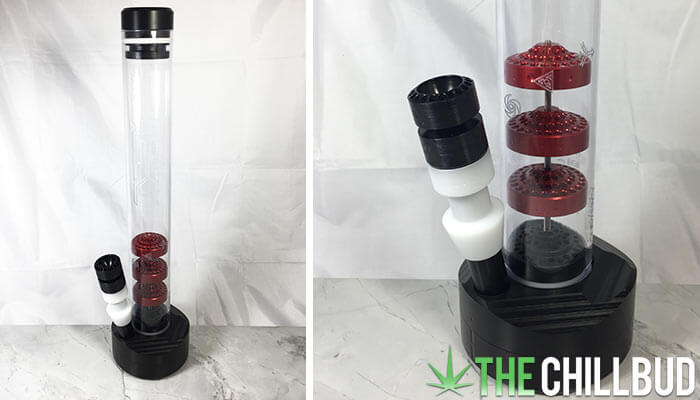 JET offer a few different models to choose from, the model we got was the small black X5 waterpipe which retails for $214.34 USD. Each of the diffusors / percolators cost $50 USD and they come in a variety of colors (discounts available if you purchase more than 1 perc at a time).

Not only do the JETstack percolators look fantastic and allow users to customize their pipe with their favorite color combos, each perc has 56 nozzles which offer unmatched diffusion. Add all three JETstacks together, along with the X5 diffuser core, you’re looking at 217 barrel diffusers.

Extras shown in the pictures: 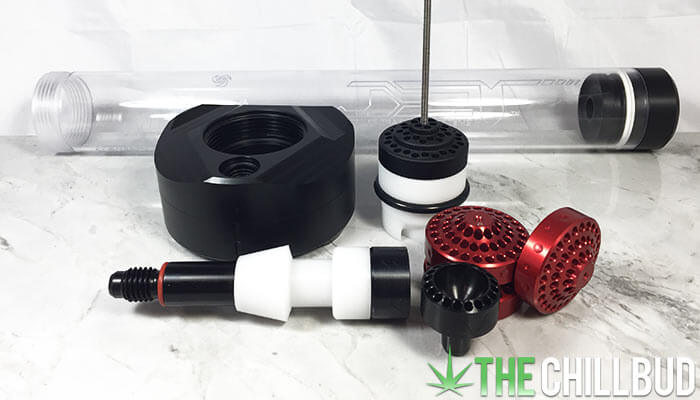 Dimensions of the JET Small X5:

The JET Waterpipe arrived almost fully assembled, you’ll just need to screw the stem into place and you’re good to go. For transport / cleaning / customization purposes you can disassemble the JET waterpipe completely in a matter of moments.

Let’s address the main concern with the JET right off the bat, the fact that it’s plastic. Generally people prefer to use glass because it offers the purest taste and it’s the easiest to clean. The downfall of glass bongs is that they’re extremely fragile; who hasn’t broken a glass pipe / bong at some point in their life? The tube itself is made from a high quality polycarbonate (the same material used in bulletproof glass), making the JET extremely durable. The JET tube itself is never exposed to heat, it simply holds the water and smoke, so no nasty plastic flavor will leech into your rips.

The next major concern we want to address is the aluminum bowl. Generally smoking out of aluminum is not something you want to be doing, not only does it release a nasty flavor into the smoke, it releases plenty of terrible toxins that you don’t want to be inhaling. JET went with the aluminum bowl for a number of reasons, one of them being the fact that it dissipates the heat really well. To get around any nasty flavor or toxins finding their way into the smoke they’ve used a hard anodized coating that provides a flavor as pure as glass. If you’d still prefer to use a glass bowl with your JET waterpipe that’s always an option, any 14mm bowl will fit seamlessly into the stem.

Check out the Grasshopper vaporizer paired with the JET on Instagram. 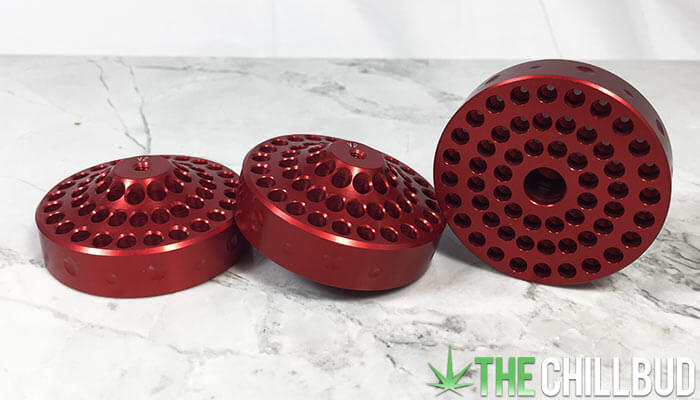 Now let’s dive into how well the JET waterpipe works.
After the very first pull I immediately noticed what makes the JET such a coveted piece among waterpipe enthusiasts. The diffusers work absolute wonders on the smoke, instead of chugging large smoke bubbles through the water, the JET creates thousands (maybe?) of tiny bubbles that travel through each of the percolator plates. It was unlike anything we’ve experienced with a waterpipe, it was reminiscent of the bubbles you’d blow into a glass of milk. I may have gone a bit overboard with the first toke, but it was still one of the smoothest rips I’ve had from a bong.

The percolators are absolutely fantastic! But they’re only one piece of the puzzle when it comes to how the JET provides such smooth pulls time after time. In the base of the pipe itself the smoke is thrust into a high velocity cyclone filter that helps remove any ash or particulate from the smoke / air.

While the percolators make the JET waterpipe what it is, there was another feature that really caught our attention; the no-pull air bypass on the stem. Instead of pulling the bowl out after your haul to draw in clean air and clear the chamber, you simply pull down on the bypass found on the stem and it opens up an airway that will bypass the bowl and allow clean air to rush into the chamber. It’s hard to describe how satisfying this feature is, it’s one of those things that you need to experience to truly appreciate. All we can say is that it’s awesome!

Cleaning the JET waterpipe is a little bit more involved than cleaning a conventional glass bong, but it’s dead simple. An important note when cleaning the JET is to only use isopropyl alcohol, using other solvents can damage the piece and potentially hurt the plastic tube. Because every component screws off, you can easily access every little nook and cranny of the JET. 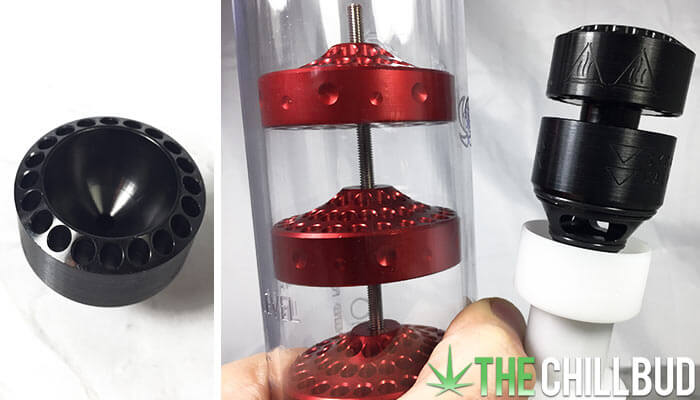 The water pipe itself is extremely durable, dare we say indestructible… JET even offers a lifetime warranty to set your mind at ease.

Diffusion is the name of the game, and JET tops the charts. Even without the added percolators (sold separately) the 49 perc base does an unbelievable job cooling down the smoke and providing smooth AF pulls.

The stem included with the JET waterpipe will fit any 14mm bowl you have on hand. Using the no-pull air bypass (spring loaded) you can easily clear the chamber without fiddling with bowls or conventional carbs. It’s just slick as hell; I love it!

I can see the price of the JET being a bit of an issue for some people. Paying $200+ for a bong that isn’t glass is a hard pill to swallow. Not to mention the JETstacks themselves. After trying the JET waterpipe I wouldn’t have any issue paying the price though, it simply blows conventional water pipes out of the water.

Aside from the price, there’s really nothing else I can find that I don’t like about the JET waterpipe. It’s a bong, it performs extremely well, it’s easy to use and simple to maintain. What more could you want?

If you’re in the market for a bong and value function / performance above all else, the JET Waterpipe is the way to go. Rest easy knowing that your bong is virtually indestructible and comes with a lifetime warranty. Enjoy some of the smoothest rips possible thanks to the unparalleled diffusion technology found in the JET.