In pursuit of the perfect vaporizing experience, a couple of friends decided to create a vaporizer that didn’t compromise whatsoever when it comes to quality and function. Sasha Robinson and Mark Williams are the masterminds behind Firefly vaporizers, bringing their expertise in design and technology to the vaporizer community.

Previously Sasha and Mark had worked in the tech world, coming from Flip (camcorders) and the tech giant Apple. It’s no wonder why the Firefly 2 is considered the iPhone of vaporizers. 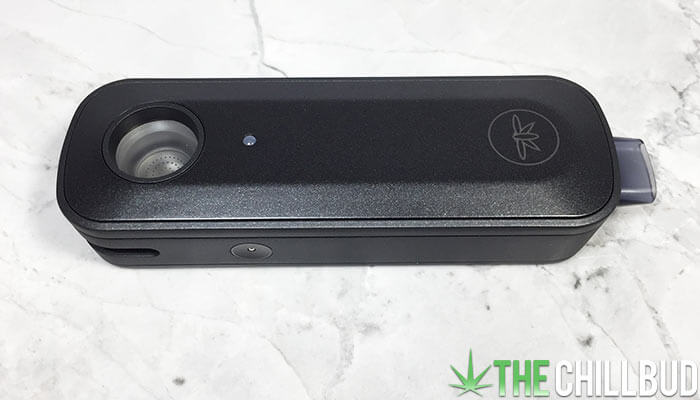 The Firefly 2 has raised the bar for premium portable vaporizers, but it also comes with that premium portable price-tag of $329.95. With a glass bowl, glass vapor path, true convection heating, ability to vaporizer herb as well as concentrates, a comprehensive app (for Apple & Android) and a jaw-droppingly gorgeous design I can confidently say the Firefly 2 is worth every penny. That’s not to say it doesn’t have its drawbacks though. 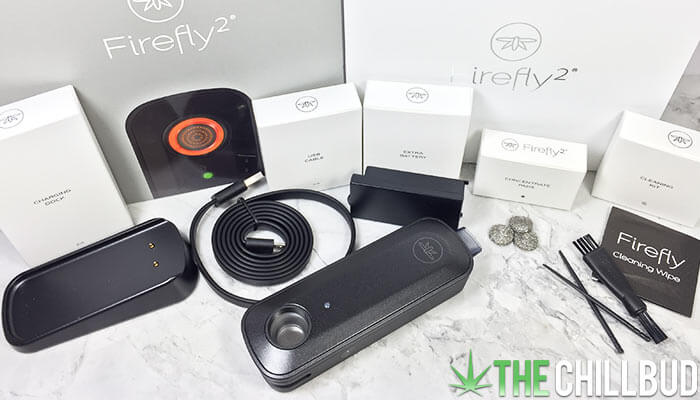 The Firefly 2 has quite a few features that set it apart from other vaporizers currently available. The most important feature that the Firefly 2 brings to the table is the fact that it’s a true convection vaporizer. For those who aren’t familiar with this, it means that the herb is heated by the air passing through / around it. This helps make the FF2 one of the most efficient vaporizers we’ve ever seen. The herb is only being vaporized when you’re hauling on the unit, there’s no burn-off between pulls so you can get the absolute most out of each bowl.

Aesthetically the Firefly 2 is a breathtaking piece. It has a pipe-like look and feel with a very clean and sophisticated design. The warm familiar glow from the bowl when the FF2 is heating gives users a comforting feeling that adds to the authenticity of the whole experience. Not only does the glow let users know that the unit is actually heating up, it contributes the identity of the Firefly and makes the whole thing far more satisfying than an LED light or digital display letting you know the unit is heating up. As a long-time cannabis user with plenty of experience with pipes, bowls and joints, that faint glow is as comforting as a home cooked meal.

You can monitor your herb / concentrate easily through the glass on the top of the Firefly, just another small feature that gives the FF2 a classic pipe feel. This is really a convenient feature and I’m surprised you don’t see it more often. Because of the way the vapor path is laid out, this beautiful glass window into the bowl will get dirty quickly. After each use I have to both empty the herb chamber and scrape off the lid because herb will stick to it. Keeping the glass window (and the entire vapor path) clean is a breeze. A quick wipe with one of the supplied cleaning cloths will have your Firefly 2 looking brand new in a flash. 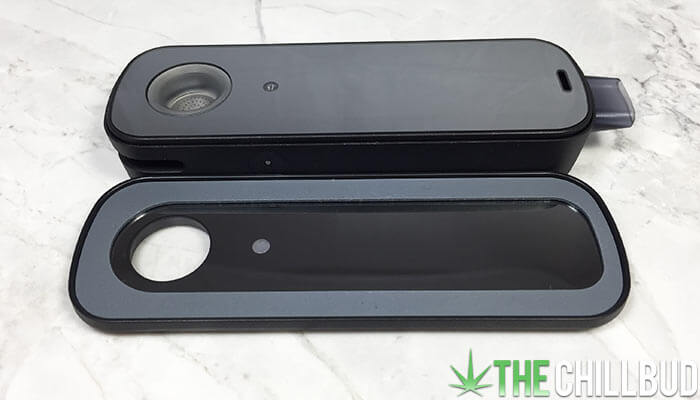 There are no buttons on the Firefly 2. Weird right?! Instead, the futuristic folks at Firefly Vapor placed a couple of touch sensors on the side of the vaporizer that will sense when you’re holding it. Just place your finger over the sensor and the FF2 will reach temperature in about 3-seconds, take a long deep draw and release the sensor. Using the Firefly 2 is as simple as picking it up and taking a puff, it couldn’t be easier to use. That being said, there is some technique required when it comes to the draw itself.

To get the absolute best vapor pulls from the Firefly 2 you’ll want to take a few ‘cigar puffs’ (short puffs using your mouth and quickly exhaling through your nose) to heat the herb up. Once the herb is heated up (2-3 cigar puffs), you can take a long draw (10-seconds is recommended) that will provide a robust vapor cloud. When vaporizing concentrates you’ll want to ‘cigar puff’ a few more times than normal. 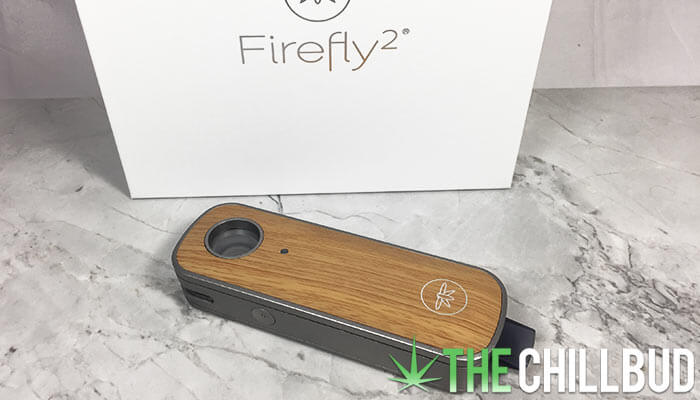 Again, the Firefly 2 has no buttons whatsoever, everything is controlled through an app you can install on your iPhone or Android device. Once you pair your FF2 with your phone via Bluetooth you can choose between 5 different temperatures for vaporizing herb or a special concentrate setting that ramps the temperature up to 500° F. The app also lets you customize how the touch sensors work, monitor the battery life and even update the firmware of your Firefly.

Let’s get right down the most important aspect of any vaporizer, the quality of the vapor itself. The Firefly 2 is one of the most impressive vaporizers I’ve ever used thanks to the immaculate flavor and remarkably smooth vapor. Hot vapor is never a good thing, it can burn your lips / mouth and irritate your throat and lungs, making the whole vaporizing experience less than ideal. The vapor from the Firefly2 isn’t hot, it isn’t even warm. The vapor from the Firefly2 actually feels cool on the mouth, making the pulls extraordinarily smooth and flavorful.

If you’re familiar with some of the different cannabinoids and terpenes found in cannabis, you probably know they boil (turn into vapor) at different temperatures. Many of the terpenes (responsible for the flavor / aromatic profile of the strain) will start to boil off at very low temperatures. A conventional conduction vaporizer will destroy a lot of these terpenes before you ever get a chance to experience them. The on-demand convection heating of the Firefly 2 allow the user to taste and experience each and every nuance of their herb because it heats up as you draw. After each draw the herb will have a slightly different flavor profile as some of the early terpenes are boiled away, it makes each strain and each bowl a journey.

A powerful 50W heater allows the Firefly 2 to reach temperature in just a few seconds, but it also contributes to a disappointing battery life. Each charge will get you between 12-20 complete draws (2-3 bowls), while this isn’t that uncommon among portable vaporizers, I was hoping for a more impressive battery life. Firefly Vapor includes 2 rechargeable batteries in each box and the unit charges really quickly (45-60 min), so battery life is almost never a real issue. 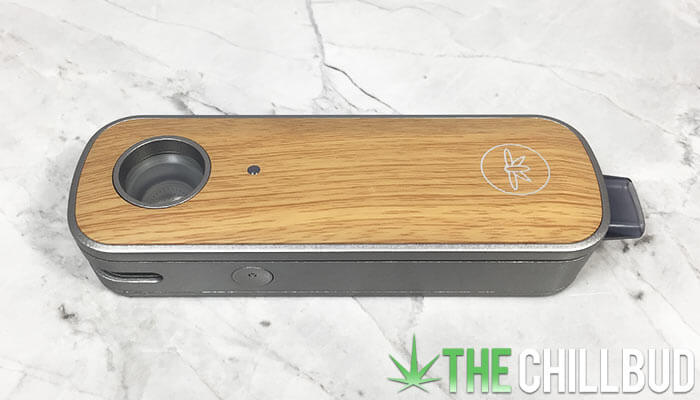 The perfect draw resistance is something very personal to vapor enthusiasts, some prefer almost no resistance, others like heaps of it. The Firefly 2 has a pretty restricted airflow, even more so if you neglect cleaning the tiny metal screen found in the mouthpiece. Personally I feel like it’s a bit too restrictive, making long sessions a bit laborious. Using a coarse grind and packing the bowl loosely will help, but the mouthpiece is responsible for the vast majority of the air restriction. Again, this is just my preference and I’m sure many of you will disagree and be very pleased with the airflow of the FF2.

The Firefly 2 is one of the best when it comes to flavor and vapor quality.

On-demand convection heating makes the Firefly super efficient. If you like to take a toke here and there, stretching a single bowl throughout a few hours or even days, the Firefly has you covered. Nothing goes to waste.

The style of the Firefly speaks for itself, but the feel is something that’s difficult to convey without physically having one in hand. All I can say is that it feels fantastic.

Seamlessly switching from vaporizing herb to concentrates is almost essential in today’s marketplace. The Firefly 2 excels at both, and quite frankly the flavor of the concentrate vapor is better than anything else we’ve tried.

Ease of use is important, no one wants to read a 10-page manual in order to use their vaporizer. With no buttons and a familiar pipe-style design the Firefly 2 couldn’t be easier to use. 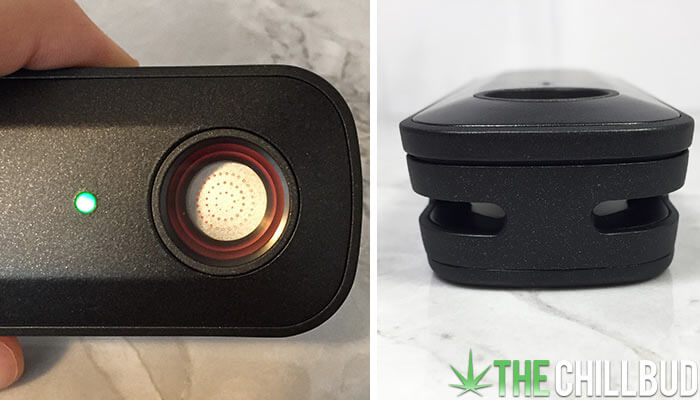 You’ll need to stir up the bowl after the first few hits. While the FF2 is efficient, the design doesn’t allow for completely even heating without mixing things up a bit.

The battery life is adequate, you get two of them, and they charge quickly. But if you’re planning on a long session with a few buds you could run into a problem. How often are you vaping more than 4-6 bowls at a time though?

The airflow is a bit too restrictive for my liking. It’s perfectly fine for a toke here and there, but prolonged sessions highlight the issue.

The Firefly 2 is different from any other vaporizer I’ve used before. Not only does it provide one of the purest tasting and feeling vaporizing experiences, it seems to be designed for the nostalgic pot-smoker and first-time user alike. Connoisseurs will flock to the FF2 for the cleanest vapor pulls available in a portable vape and rarely seen convection style heating. Newbies will be drawn towards the easy to understand design and function of the vaporizer.

The price of the Firefly 2 might be a hard pill to swallow, but it’s a must have vaporizer if you’re a true vaporizer enthusiast.

If I was trying to convert someone to vaporizing cannabis over smoking it, I’d have them try the Firefly 2. The cool vapor, the robust flavors and the enticing design all contribute to an absolutely joyous vaporizing experience that anyone would fall in love with.

Top notch vapor quality and materials used. It’s on the expensive side.