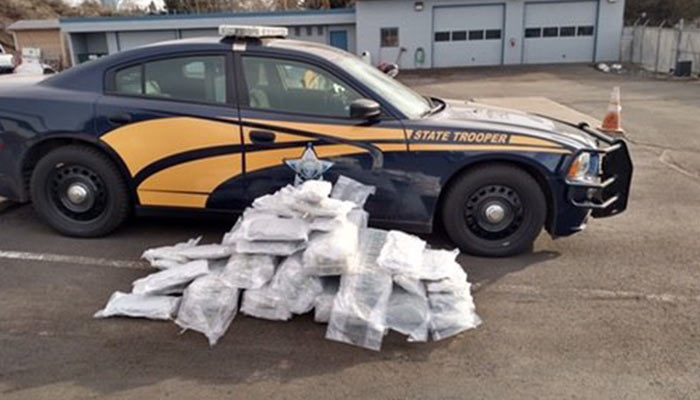 Oregon police have arrested a Juilliard-trained cellist from Minnesota for possessing around 113 pounds of cannabis in the trunk of his car, the police announced on Monday..

According to police, David Huckaby, 33, who is a graduate of the famed Juilliard School in New York City, was pulled over due to a speeding violation after being spotted going 39 miles per hour in a 25 mph zone. According to authorities, it was then that a state trooper noticed the drugs.

The total amount of processed marijuana –depicted in an image released by police of dozens of bags of cannabis– is estimated to have a street value of around $226, 000.

“People who are buying large amounts of weed and going high levels of speed are likely to get caught,” said Rob Partridge, the Klamath County District Attorney. “We’ve had a lot of mules coming through rural Oregon, whether it be meth or marijuana, and they’re coming through and they’re making mistakes on their, on speeding and our officers know what to look for.”

In addition to his Juilliard training, Huckaby was formerly a member of the Saint Paul Chamber Orchestra. A spokesman for the orchestra released a statement on Tuesday, saying, “He is a gifted musician and was actively involved in the SPCO’s community engagement and education initiatives. He left the organization in good standing at the end of the 2013-14 season.”

Due to the volume of cannabis in his possession, Huckaby was charged with unlawful possession and distribution of cannabis, despite the fact that recreational cannabis is legal in the state of Oregon. Both of those charges are misdemeanors.

Huckaby is unlikely to be charged with any felonies, because nearly all felony charges regarding cannabis possession have been abolished since the state legalized the product. Additionally, as of July 1 of last year, Oregonians may possess up to 1 ounce of cannabis on their person and 8 ounces of cannabis in their homes.

Huckaby’s arrest was greeted with a great deal of ribbing from Twitter users.

Despite the size of the haul by law enforcement, it is far from the largest recent drug bust in the state’s history: In 2014, police seized drugs from a semi-tractor trailer that were worth well over $1 million. Among the haul were 11 pounds of heroin, 190 pounds of methamphetamine, and 16.5 pounds of cocaine. The driver of the truck, Salvador Martinez-Perez, was charged with six drug-related offenses.