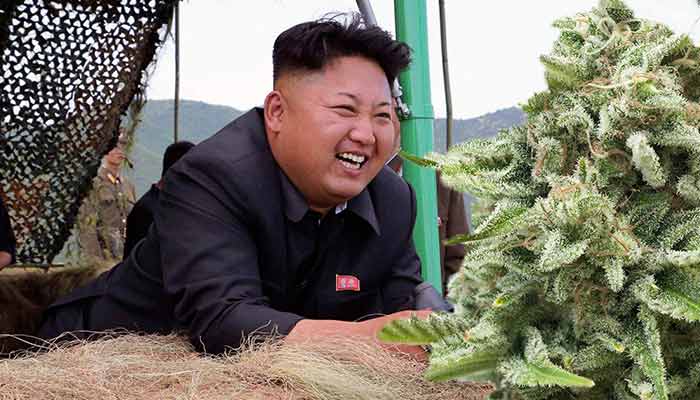 North Korea is a messed up place, and most people wouldn’t visit even if they were paid to. For being the world’s most controlling, conservative and secretive country you wouldn’t expect them to have such liberal marijuana laws. But in fact, marijuana isn’t even considered a drug in North Korea, it’s totally legal to consume, grow and transport. Technically it’s still illegal to sell cannabis in North Korea, but numerous reports suggest it’s almost never enforced.

Why Is Weed Legal In North Korea?

The powers that be in NK don’t see cannabis as a drug. There isn’t any stigma surrounding it, and there isn’t a ‘pot culture’ like there is in North America. Instead marijuana grows wild throughout the country, and many of its citizens use cannabis on a daily basis.

North Korean laborers will often smoke cannabis to help ease their aches and pains after a long day’s work. It is viewed as a medicine, not a drug, and it’s widely available.

There are also some theories that allowing citizens of North Korea to puff down as often as they please helps keep them complacent. While this might hold some water, I seriously doubt Kim Jong Un’s tyrannical reign has marijuana to thank.

Don’t expect to find super dank bud in North Korea, instead you should expect a copious amount of ditch weed. It’ll do the job, and it is costs almost nothing, reports suggest it costs about 80 cents per pound.

Cannabis isn’t stigmatized in North Korea like it is in North America. You can walk down the street with a joint, or sit down at a restaurant and light up a doob, no one will even take notice.

As repugnant as the leader of North Korea is, we have to hand it to him regarding marijuana policy. He treats marijuana like it should be treated, as a medicine and not a drug. It’s amazing to see how cannabis is treated by a country that isn’t in the pocket of big pharmaceutical companies and private prison lobbyists. Weed isn’t even on Kim Jong Un’s radar, leaving him plenty of time to focus on oppressing his own people and building his deity-like image.

If the leader of North Korea isn’t worried about the cannabis plant, why are we? Why do we sink billions of dollars each and every year into cannabis prohibition efforts instead of profiting from the legal sale of this powerful medicine?